The latest Ethereum upgrade ‘Bellatrix’ is happening today and the whole crypto world is waiting to see what effect it might have on the world’s second largest crypto asset, Ethereum. The Bellatrix update is aimed to make Ethereum running free of hassle. Now 74% of Ethereum nodes are ready ahead of Bellatrix upgrade. As mentioned multiple times before, Ethereum Merge is the long awaited upgrade to Ethereum 2.0 which is about to begin on the Ethereum blockchain. The project is aimed to convert Ethereum (ETH) from a proof-of-work (PoW) base to a proof-of-stake (PoS), known as Ethereum 2.0.

Bellatrix is the final necessary step before the official Merge. The whole mechanism of Bellatrix is to associate Ethereum node operators, in order to update its consensus layer clients prior to epoch 144896 on the Beacon Chain, which is scheduled to take place on Sept. 6, 2022, according to the Ethereum Foundation.

Now it is true that almost 74% of Ethereum nodes are now marked ready ahead of the upcoming Bellatrix upgrade but that still means another 26.7% of nodes are not yet ready for the upcoming Merge.

Following the remaining 26.7% unready nodes, Ethereum co-founder Vitalik Buterin and core developer Tim Beiko, has asked the remaining node operators in a Tweet to update their nodes if they haven't yet done so.

According to the Ethereum Foundation, has warned node operators who don’t make the update prior to the Bellatrix upgrade to cause the Ethereum clients to sync to the pre-fork blockchain. In a Tweet that reads:

“[Node operators] will be stuck on an incompatible chain following old rules and will be unable to send Ether or operate on the post-Merge Ethereum network.” 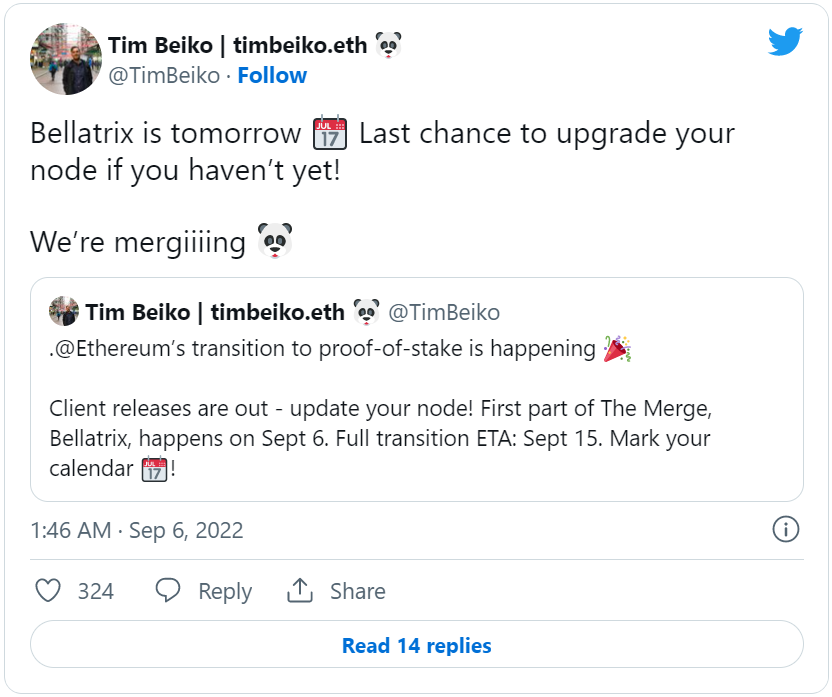 According to the Ethereum Foundation, Ethereum users who do not proceed to update their nodes or do anything with their ETH should expect the risk of scams that suggest otherwise.

Want to buy Ethereum with the best price? Visit: buy and sell Ethereum