The world's biggest and most well-known search engine, Google, is providing data on Ethereum addresses. By entering some Ethereum address in google’s search bar, you can understand how much Ethereum it holds at the moment. This feature is a big step for Google towards building a crypto based community. We all know that Ethereum is the second-largest cryptocurrency by market cap after Bitcoin. This is while google does not provide any data about Bitcoin addresses even though Bitcoin is the world’s largest and most widely used crypto asset. This has kept many crypto investors wondering “What about Bitcoin?”

The Principal of Google Ventures, Han Hua, first made it public in a Tweet on Tuesday.  However, there have been reports that some of the addresses work while others don’t, and that means that the feature has not completely been activated and that google plans to run it incrementally. 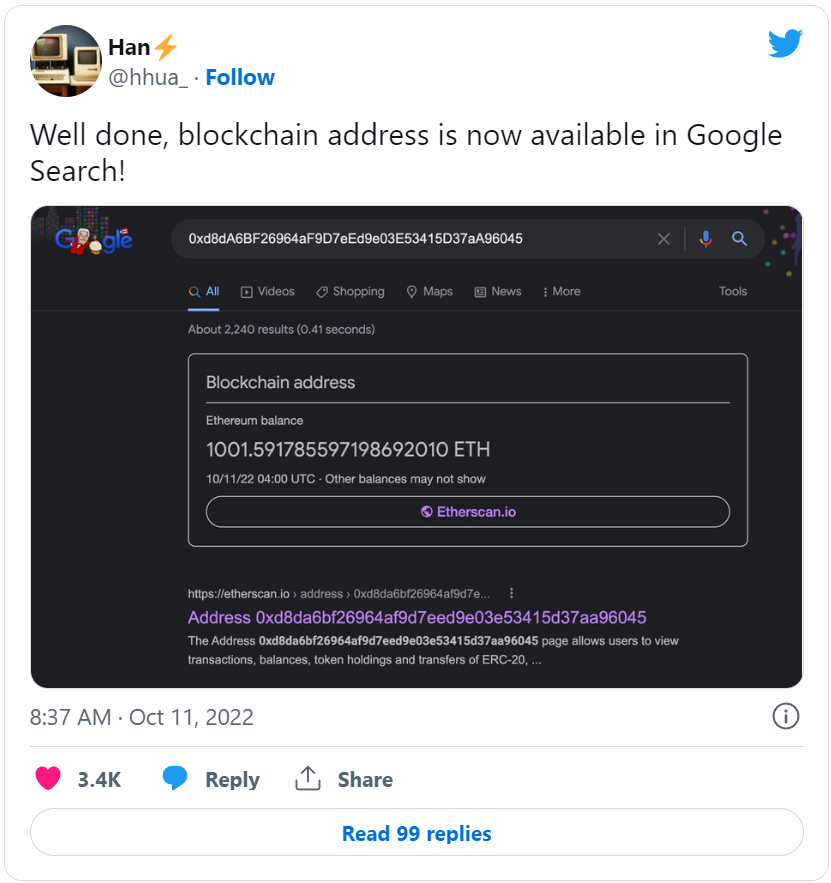 The act has proved that google is becoming more and more crypto friendly. The publicity of Ethereum addresses can help people find out how much ETH a wallet holds, what transactions it has made, and what applications its owner has interacted with on the network. This can be greatly useful to individuals and businesses active in the field of cryptocurrencies.

Not only this, but Google's recent efforts have further proved that it is working on features to get its users more involved in the world of blockchain-based services and Web3.

Google still does not accept crypto payments. However, it seems like it is heading towards it with Google’s addition of wallet balances. Seemingly, we should wait for other crypto wallets to appear on the site and eventually be able to buy and sell cryptocurrencies using only Google.