Last month, the Federal Reserve System announced a 0.5% rate hike, the highest in 22 years. Bitcoin and altcoins pumped briefly after the central bank’s policy but dumped alongside the stock market shortly after. In the following announcement, “the Committee decided to raise the target range for the federal funds rate to 1‑1/2 to 1-3/4 percent and anticipates that ongoing increases in the target range will be appropriate.” At one point immediately after the Fed's announcement, Bitcoin price hit $20,378, but did not last long.

Bitcoin (BTC) instantly reacted to the news by trading lower in the market, before slightly rebounding to $20,000 Wednesday afternoon. The hike happened 1 hour into the announcement, following which the number one cryptocurrency rose 2% to USD 21,560. 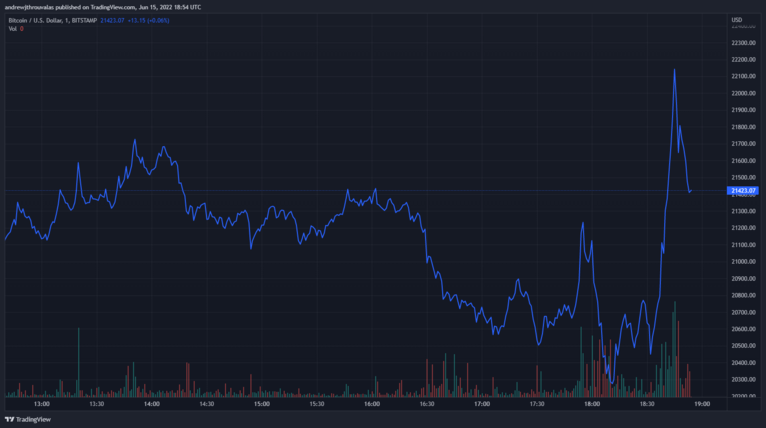 According to Fed Chairman Jerome Powell, there is still a huge gap between nominal rates and real rates so there is much more room for the Fed and other central banks to hike in the months to come.

Some analysts speculate that the reason for the highest rate hike in 28 years has roots in the Federal Reserve trying to get ahead of the curve and establish enough leg room to be able to pause hikes in the future if economic conditions continue to worsen.

Bitcoin has a tendency to experience volatility ever since the moment the Federal Reserve announced an interest rate decision. Users can currently buy and sell Bitcoin at 21665.68$, while the overall cryptocurrency market cap now stands at $931 billion and Bitcoin’s dominance rate is 44.5%.