Cardano’s Vasil upgrade, which is designed to increase Cardano's scaling capabilities and reduce transaction costs, and had originally been scheduled for a June release on a test network, is said to be released on Sept.22, 3 month after the target. The Cardano’s community has long enough put people waiting for the new upgrade, but will Cardano renege again? The promised upgrade is the blockchain’s fifth upgrade and will include improvements to the Plutus programming language and promises greater scalability for lower fees. Though Cardano  had originally scheduled its hard fork for June of this year, it has been rescheduled twice till this moment.

A hard fork is a backward-incompatible change to the software used to validate and produce new blocks. It is considered a radical change to a network's protocol that makes previously invalid blocks and transactions valid, or vice-versa. A hard fork requires all nodes or users to upgrade to the latest version of the protocol software.

Charles Hoskinson, founder of the blockchain, announced on a YouTube vlog that September 22 is the date for its Vasil mainnet upgrade.

The company’s R&D which worked on the update has announced three necessary critical mass indicators which are met by this moment:

“1. 75% of mainnet blocks being created by the final Vasil node candidate (1.35.3)  2. approximately 25 exchanges upgraded (representing 80% of ada liquidity)  3. top 10 DApps by TVL confirming they have upgraded to 1.35.3 on PreProduction and are ready for mainnet.” 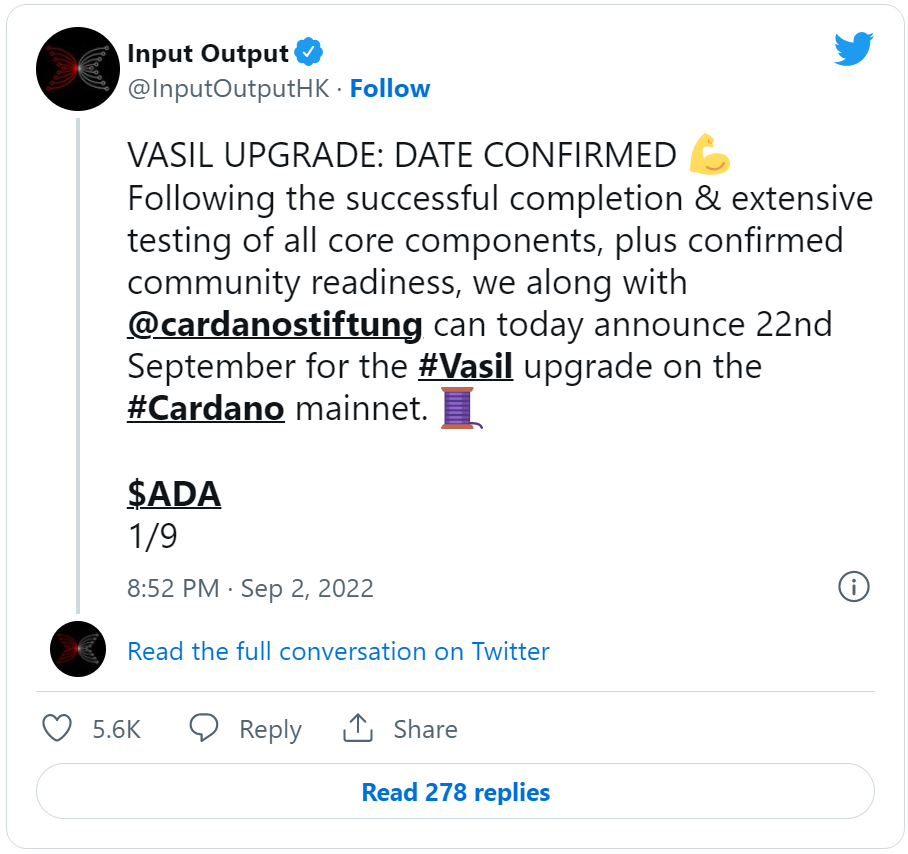 The Vasil upgrade for Cardano, which happened one week after the Ethereum Merge, has not put much space to focus on Cardano’s developers nor the ADA price charts. However, it’s worth mentioning that the ecosystem has roughly seen a surge since May,  bouncing between $0.42 and $0.6, and is now being traded for $0.4946 at the time of writing.