Cardano is up and rising again but this time it’s not the case with its price. Cardano is currently in a bull run but its native token ADA has not performed very well recently. See what the reason behind this trend is. Cardano, Major Ethereum competitor, has been going through a daily transaction bull run despite the negative performance of its native token, ADA. According to CoinMarketCap, ADA’s price slightly rebounded to $0.4012 after a 0.70% decrease to $0.36 in the past 48 hours. ADA’s trading volume has also had a 21.71% loss in 24 hours.

But what is the reason behind the bull trend for Cardano?

It’s been said that the bullish run for Cardano can be referred to the increased number of its daily transactions.

Another news that came up for the assets was the listing of Cardano on crypto exchange platform, FTX. Unlike how it seems and possibly should be, Cardano’s listing on FTX should not excite crypto investors and traders since FTX is listing ADA on the spot market.

Cardano founder, Charles Hoskinson, in reply to a Tweet by crypto influencer Ben Armstrong who had said that Cardano community should be more concerned about FTX force liquidating all the ADA from Voyager, saif that “If FTX lists ada, then my understanding is that the ada accounts on Voyager won't be liquidated.” He then expressed his anger at the assumption that FTX pulled the trigger on the liquidation. He said that he would be outraged if FTX went forward with the liquidation. 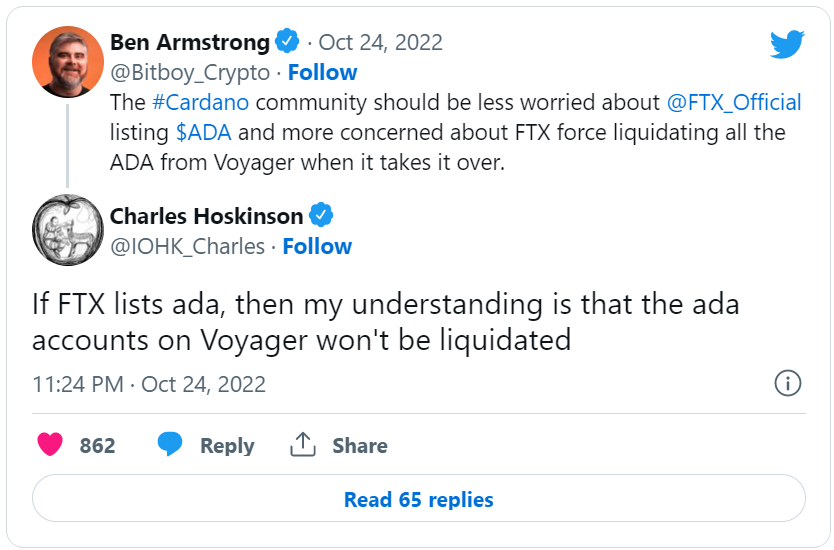 The increase on the Cardano blockchain may boost the price of ADA. As network activity grows, so do ADA use cases, including NFT purchases, might eventually sustain ADA's pricing action. This, however, does not mean that investors should sit back and relax. With the crypto market always in flux, it may be prudent for the Cardano community to be cautious.