A while ago, a video featuring an Elon Musk deepfake on the set of a TED talk originally from April 15, 2022 went viral on which Musk was announcing a new cryptocurrency trading platform named ‘BitVex’, promising 30% returns on any cryptocurrency deposits. The video shows Elon Musk claiming to own “BitVex” and having Made $8K in 1 month via a new Trading Bot on the platform. Deepfake videos are propaganda tools created using artificial intelligence which create images of false events. In this case, criminals used Tesla CEO Elon Musk’s face and voice to create a deepfake video in order to scam crypto investors. However, the video was not too convincing as Musk’s voice is robotic and it is hard to understand what he is exactly saying.

A few hours later, Tesla CEO Tweeted that the video is not real, saying “Yikes. Def not me.” 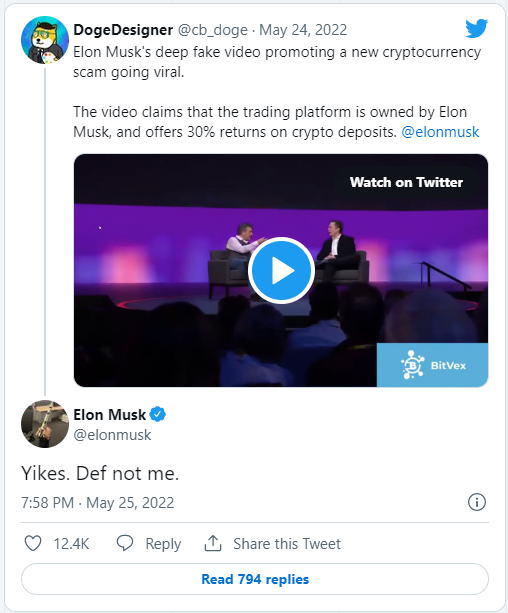 Subsequently after, Billy Markus, the co-founder of Dogecoin, also reacted to the act by saying “Someone stupid enough to invest in that deserves to lose their money, but at the same time the scammers deserve to spend their life in jail.” He also added that anyone watching the video and thinking it’s real would lose their money to anything.

The website has also created fake content from other major players of the crypto world including Changpeng Zhao, the CEO of Binance as well as Cathie Wood, the CEO of Ark Invest.

Fortunately, not a lot of people have fallen for this scam with only $1,700 worth of crypto coins deposited so far.

You don't necessarily have to be an expert to identify deepfakes and avoid scams. Anything that is too good to be true, chances are high that it’s not. So keep your eyes wide open and stay away whether it’s crypto or not.