Elon Musk who previously announced his intention to buy Twitter for $54.20 per share, or about $44 billion in cash has terminated the deal, claiming that his preset conditions weren’t being respected by the Twitter board. Tesla and SpaceX CEO, had stipulated the condition for Twitter to remove all spam and scam bots accounts. However, the billionaire is not now happy with the lack of information Twitter provided about spam and fake accounts.

Musk’s attorney has said in a letter:

“In short, Twitter has not provided information that Mr. Musk has requested for nearly two months notwithstanding his repeated, detailed clarifications intended to simplify Twitter’s identification, collection, and disclosure of the most relevant information sought in Mr. Musk’s original requests.”

Elon Musk initially agreed to purchase the crypto-friendly social media platform for $44 billion, however, in May after Twitter released an estimate that 5% of the platform’s accounts were fake, Musk put the deal on hold. “Twitter deal temporarily on hold pending details supporting calculation that spam/fake accounts do indeed represent less than 5% of users,” said Musk.

Having said all that, Musk's attorney made it clear that the billionaire believes the actual number of bots making up total users is much higher than 5%, leading him to turn his back to the previously finalized deal.

The board of Twitter who was initially happy with the decision, is now certainly not happy with Elon Musk terminating the deal and abandoning the contract. Twitter chairman, Bret Taylor, recently Tweeted that the board is committed to closing the transaction on the predetermined terms and will pursue legal action if necessary. “We are confident we will prevail in the Delaware Court of Chancery,” said Taylor. 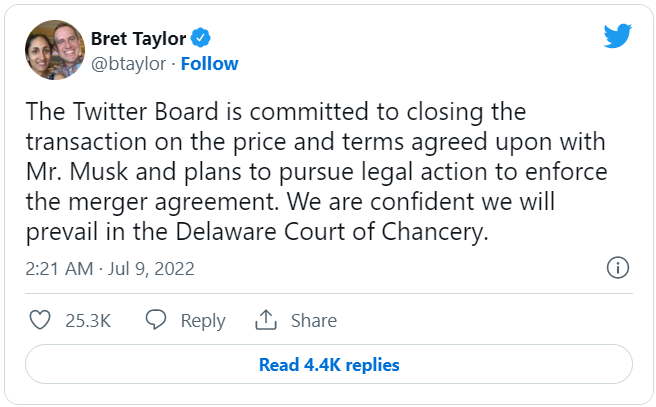 Musk also had a master plan to improve the social media platform which included new features like the ability to edit Tweets and view edit history.