Ethereum inflation in the highest level since EIP-1559 Ethereum gas fees are currently at the level of May 2020, when Ethereum price was around $200. The amount of ETH burned by EIP1559, one of the five Ethereum Improvement Proposals, is lower than ever before, with only %11 of issued coins being burned from circulation.

The process of removing coins from circulation, known as Ethereum burn mechanism, was in fact aimed to make Ethereum (ETH) deflectionary. The burn mechanism was initially adopted by Ethereum as a means to help transition users over to its new proof-of-stake (PoS) network from the current proof-of-work (PoW). However, with relatively high issuance rates for Ethereum, the whole process is going the other way around.

As cited by Glassnode’s lead researcher, this is the most inflationary ETH has been since EIP-1559 went live. 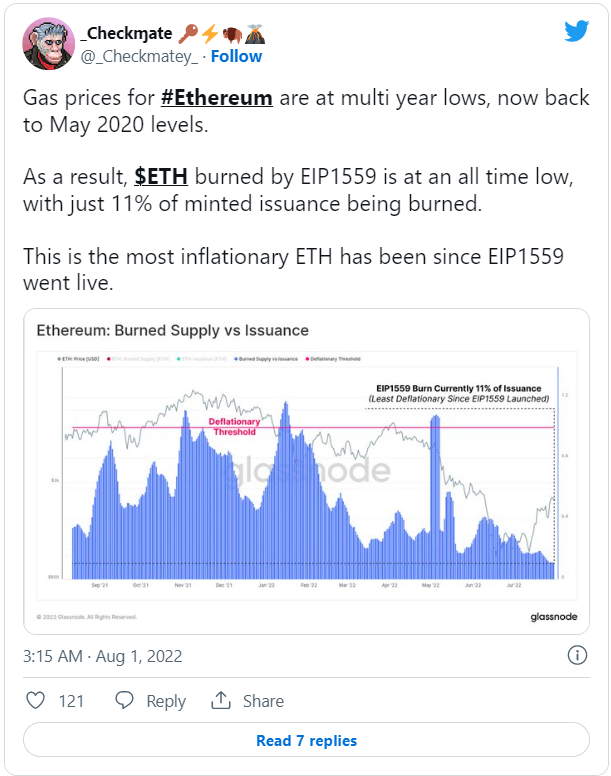 The new upgrade of Ethereum, Ethereum Merge, is expected to make Ethereum deflectionary with the help of EIP-1559 by burning ETH. The Merge will reduce the network’s energy consumption by more than 99% but it won't affect the transaction fees significantly.

During the current bear market, Ether's value does not seem to be increasing but considering the fact that it is going to become a deflationary coin following the Merge (as predicted by the experts) it could show a rise in the hedge store of value.

This is while many investors and experts still believe that there is a two-faced scenario behind the Merge, and that the Merge is a bull trap or an inaccurate signal that shows a decreasing trend in a crypto asset has reversed and is now heading upwards, when in fact, it will continue downward.