The past few week’s breaking news of the crypto world have all been revolving around the Terra ecosystem, its drastic plunge and the headquarters plan for a revival. Once again the token has derived all attention to itself by the news of Do Kwon sharing a burn address with LUNA holders to burn their tokens. However, the CEO has announced his disagreement about the burning mechanism. Not a long ago, the shocking news of LUNA’s dramatic fall traumatized many holders and subsequently a week later, Do Kwon, co-founder and CEO of Terraform Labs, announced a revival plan for the Terra ecosystem by forking the chain and resetting the network ownership under a new token called Terra classic. The plan, however,  received mixed reactions as many doubted the efficiency of a hard fork in reviving the fallen prices of Terra (LUNA) and TerraUSD (UST) tokens.

Apparently the pressure of the doubts casted on the revival plan and the persistent request from the crypto community has pushed Kwon to go against his initial plan and publicly share a burn address for LUNA on Saturday.

In a later Tweet, Kwon expressed his dispute against burning the coins saying that he doesn’t think sending tokens to this address to burn tokens is a good idea and that it will have no other results than losing the tokens. 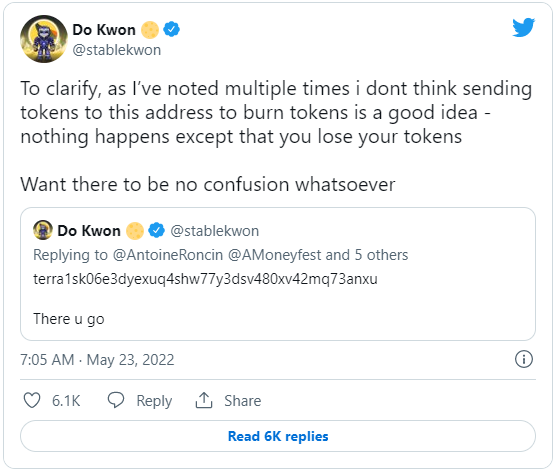 Kwon had formerly confirmed that Terra is no longer minting new LUNA, which is one of the main reasons why investors think a burning mechanism will improve LUNA’s price. Nonetheless, When he had been asked about the reason behind this avoidance, he clarified that the burn address was shared with users only for information purposes saying that he is happy to have done so but meanwhile added that it will have no impact on the market price and  he for one could not logically understand the motif behind it. 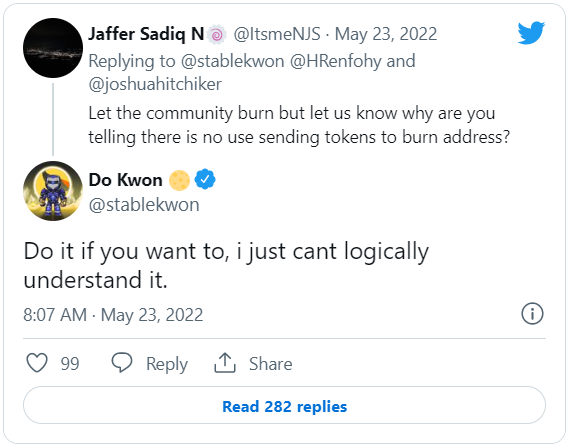 Evidently, the news of the burning mechanism has resulted in more confusion among investors as some major crypto players like Changpeng Zhao (CZ), founder and CEO of Binance, has supported the idea of burning tokens saying that “forking does not give the new fork any value. That's wishful thinking”.

LUNA investors are advised to avoid making abrupt decisions as the master plan for Terra revival continues to be up in the air.