What is a NFT token and where to buy one?

NFTs, or non-fungible tokens, are widely used today. These digital assets, which range from paintings and food to modern pieces of music, are selling for millions of dollars at times. Follow the rest of this article to learn all about NFT tokens and where to buy them. NFTs cannot be bought or swapped for equivalent amounts like cryptocurrencies can. This contrasts with fungible tokens, like cryptocurrencies, which are interchangeable and may thus be used as a medium for business transactions. This article will tell you all about NFT tokens.

What is a NFT token?

The word "Non-Transferable" (NFT) clearly denotes that due to its distinctive qualities, it cannot be altered or substituted. Both fiat money and cryptocurrencies may be traded or swapped for one another since they are both fungible. On the other hand, fungible items are exchangeable because their worth, not their special qualities, determines them.

How do NFT tokens work?

Blockchain, a distributed public ledger that stores transactions, is where NFTs are found. Most likely, you are probably familiar with blockchain as the mechanism behind cryptocurrencies. NFTs are specifically stored on the Ethereum blockchain, while they may also be used on other blockchains. Digital objects that represent both real and unreal objects are used to produce, or mint an NFT, such as Graphic art, GIFs, Videos and sports highlights, Collectibles, Virtual avatars and video game skins, Designer sneakers, and finally music.

How Is an NFT different from cryptocurrency?

Infusible Token is referred to as NFT. Although it is often developed using the same type of programming as cryptocurrencies like Bitcoin or Ethereum, the similarities end there.

Having the ability to be sold or swapped for one another, physical money and cryptocurrencies are both "fungible." A dollar is always worth another dollar, and the value of one Bitcoin is always equivalent to the value of another Bitcoin. Due to its fungibility, cryptocurrency is a reliable method for blockchain transactions. 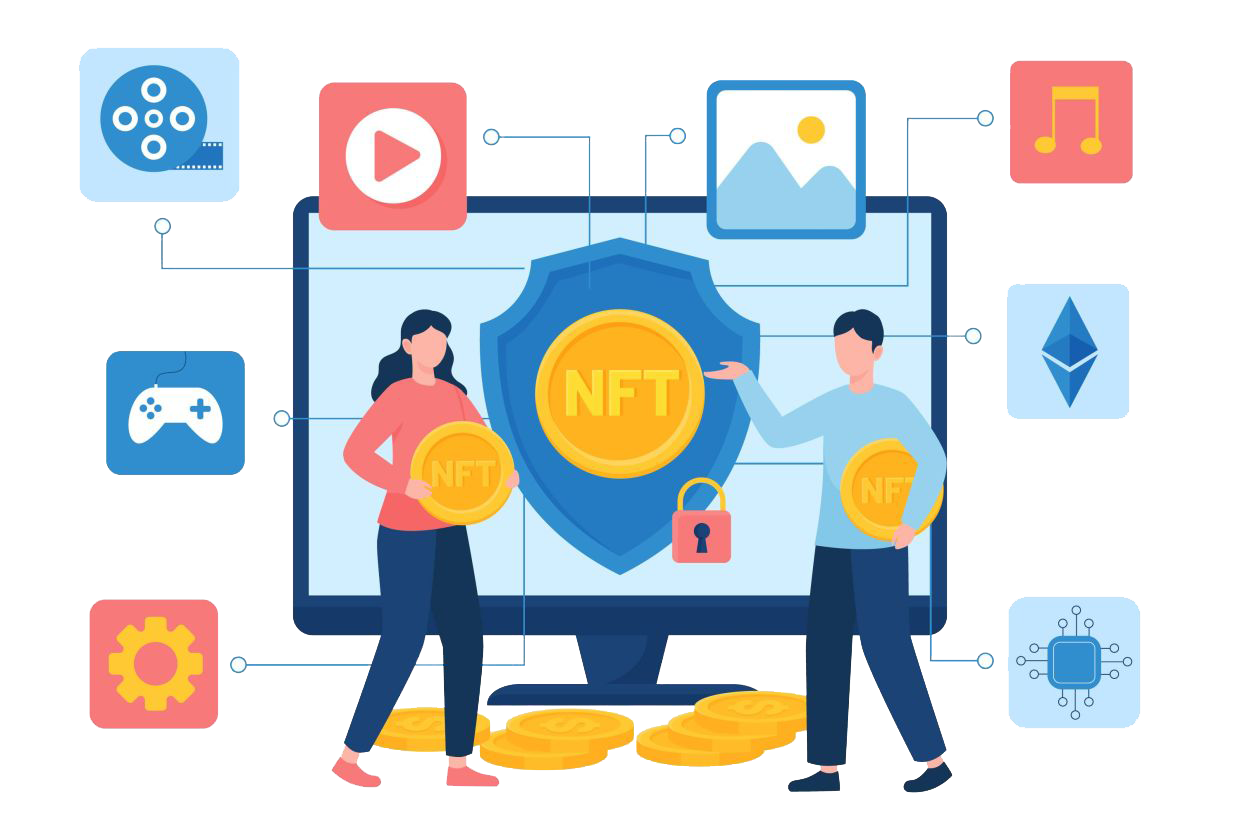 What are NFTs used for?

NFTs and blockchain technology give artists and content producers a special chance to monetize their works. For instance, artists are no longer required to sell their work through galleries or auction houses. Instead, the artist may sell it as an NFT straight to the consumer, allowing them to keep a larger portion of the sales revenue. Additionally, artists may encode royalties into their software so that every time their work is sold to a new purchaser, they will earn a share of the transaction. Since artists typically do not earn more income after their initial sale, this is a desirable feature.

Is NFT token a good investment?

It is not a smart idea to invest in a security just because it has been tokenized into an NFT. NFTs are not investments in and of themselves, therefore before you buy one, be careful to research the value of the underlying asset.

Can NFT token be converted to cash?

An NFT is a work of art that can be exchanged for cash or cryptocurrency. However, just like bitcoin, the token's asset transfer is documented in the blockchain. This identifies the current owner.

Each NFT is associated with a digital (or occasionally physical) object that belonged to the original owner. Technically, an NFT may be created from anything in digital form. Anyone may create NFTs of well-known tweets, Facebook updates, Instagram photos, and more, and sell them.

Why are NFT tokens expensive?

Simply put, the price is high because it is the only painting of its sort that has ever been made and because it was produced by one of the greatest painters of the 20th century.This is why one-of-one pieces account for a sizable portion of the priciest NFT sales that we have observed so far.

How can I buy NFT tokens?

Numerous NFT marketplaces exist. The biggest at the moment is OpenSea, which supports over 150 alternative payment tokens in addition to using Ethereum as its primary payment token. Binance NFT, Rarible, and Foundation are other NFT markets with a vast selection of works of art and antiques.

Specific assets are traded on some platforms. Examples include The Musician Marketplace, which specializes in musical compositions, and NBA Top Shot, which is the National Basketball Association's legally sanctioned marketplace where fans may buy digital video highlights.