PayPal policy to punish users for misinformation was posted in error

A while ago, PayPal, the giant name in the world of finance, claimed that users who spread misinformation should expect punishment and will be fined $2,500. Now the payment platform has announced that it is not true and it has actually come out “in error.” Despite its withdrawal, PayPal has vividly mentioned that this is a fine example of legal actions regarding self-custody of funds and it is what needs to be done and necessary in this matter.

According to PayPal  all "prohibited activities" such as the "ending, posting, or publication of messages, content, or materials that meet certain criteria" would have legal persecution and the offenders would be punished with "liquidated damages" of $2,500.00.

Want to exchange PayPal to other currencies? Visit: buy usdt with paypal

A PayPal representative has claimed that the statement was made by mistake and the references no longer appear in the current policy of PayPal.

"PayPal is not fining people for misinformation and this language was never intended to be inserted in our policy. Our teams are working to correct our policy pages. We’re sorry for the confusion this has caused."

Former PayPal president, David Marcus, has also reacted to the matter by saying that even though PayPal is one his favorite companies and one that he had deeply loved, their new policies and regulations goes against his beliefs and he no longer confirms their actions. He also condemns the fact that they give themselves the right to confiscate public property merely because they have spoken against their will. 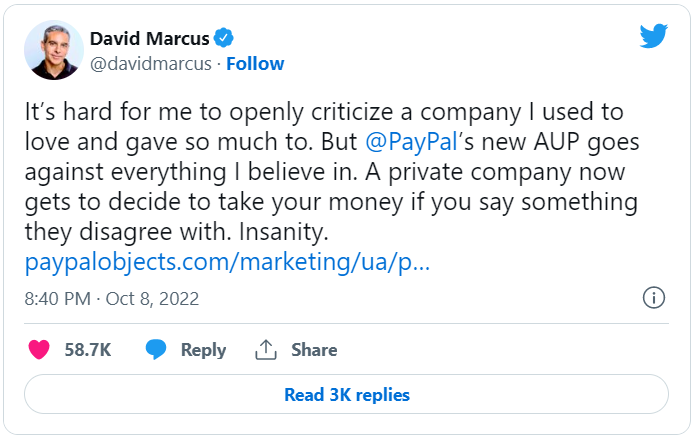 "It’s hard for me to openly criticize a company I used to love and gave so much to. But PayPal’s new AUP goes against everything I believe in," Marcus tweeted. "A private company now gets to decide to take your money if you say something they disagree with. Insanity."

American politician, Tim Scott has taken to Twitter that it’s completely illegal for “private companies to become thought police” and that they would investigate the matter.