Ethereum Merge, which has catched all eyes in the crypto market and is said to be released in late September 2022, has now shown some bugs in their Mainnet updates Geth v1.10.22 (Promavess) and v1.14.0, respectively. Péter Szilágyi, Ethereum developer, has announced that there was a bug that caused data loss in the latest release. Many people looked up to the Merge as a silver lightning for the ETH ecosystem however, there were some rumors regarding a two-faced scenario behind this all. Some said that  the current Ethereum up and downs could be a bull trap given the macroeconomic factors at play. The bug found in the new update could be a proof to all that was said about the promising Merge.

Péter Szilágyi, an Ethereum software developer, has announced on Twitter that they have found a bug that results in a corrupted state. He explained that it was most probably one of the PRs they’ve merged towards the new storage model / online pruner. He also added that they are “Trying to find and fix the issue.” 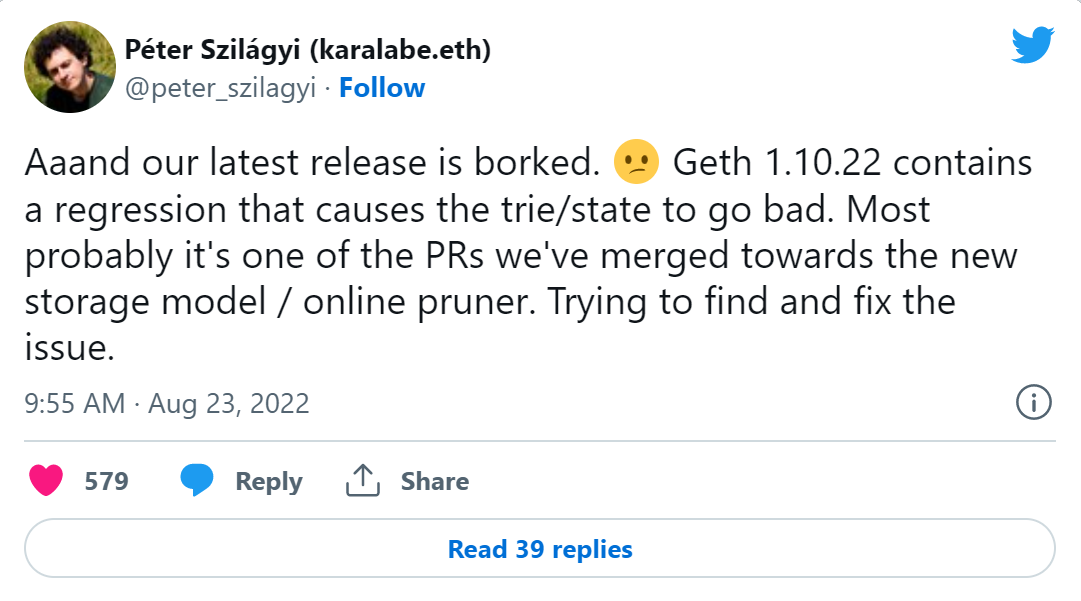 The bug is said to be harmful to the running node with the v1.10.22 and could lose the data or corrupt the entire database and that's why it has raised a great debate towards the effects it can have on the Merge and the price of Ethereum.

Rumors are saying that these bugs could delay the Ethereum Merge. However, the bugs most probably won't harm the Ethereum Mainnet merge with the Beacon Chain on the anticipated date of September 15.

A similar regression bug was also found in the release v1.14.0, which was fixed by the team by deciding to switch to a strict stabilization phase before the Merge.

Nethermind core developer, DanielC, has said in this regard:

“Recently we’ve had similar regressions in Nethermindeth so we’ve decided to switch to a strict stabilization phase before The Merge. We merge only fixes to the master branch currently.”