Ripple SEC case comes near to a conclusion

The U.S. Securities and Exchange Commission (SEC) and Ripple Labs have all called a Federal judge to decide whether Ripple has outlawed U.S. securities laws and in case it hasn’t, dismiss all legal actions without having to hold a long-lasting trial. Judge Analisa Torres, have been called by both parties to take action and rule as fast as possible. In the meanwhile, Ripple argued that the SEC does not own enough convincing proofs for the involvement of an “investment contract," while the SEC insists it does.

Ripple CEO, Brad Garlinghouse, has posted a Tweet on Sept. 17 saying that the SEC isn’t interested in applying the law.

“They want to remake it all in an impermissible effort to expand their jurisdiction far beyond the authority granted to them by Congress,” he said. 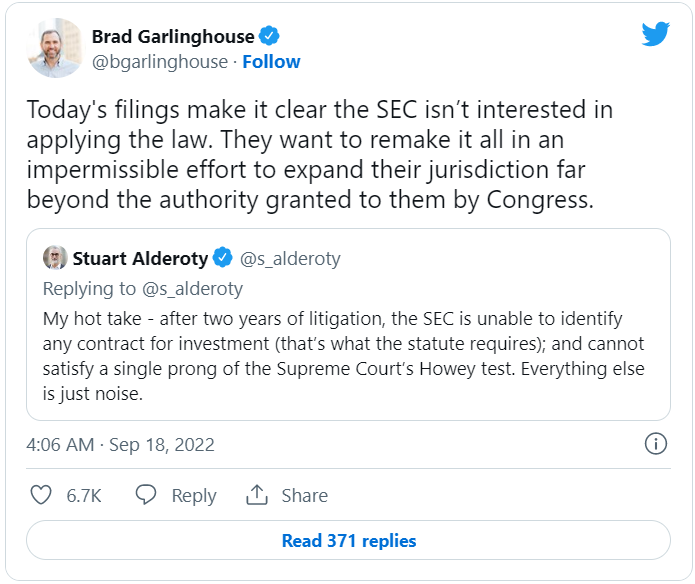 On the other side of the story, Ripple claimed that the case “boils down to an impermissibly open-ended assertion of jurisdiction over any transfer of an asset."

A community member of XRP believes the SEC cannot win this argument because its expert concluded that XRP price movement is due to market movements rather than Ripple marketing efforts.

Ripple has firmly stated that there was no contract between the company and XRP investors and XRP profits came from “market forces of supply and demand.”

The company's filing has mentioned that many investors buy XRP from unknown exchanges without knowing who exactly they are purchasing from.

"Even if the SEC were to engage in a belated, post-discovery transaction-by-transaction analysis to identify XRP offers and sales with contracts, its claim would still fail as a matter of law. Not one of those contracts granted post-sale rights to recipients as against Ripple or imposed post-sale obligations on Ripple to act for the benefit of those recipients," the filing said.