The Shiba Inu (SHIB) founder, Ryoshi, whose real identity is still under a shadow of doubt, has walked away from the community by deleting all his tweets as well as personal blog posts earlier today. The unexpected act has put many Shiba investors in a haze, not knowing what is to come in the future of the asset.

Ryoshi’s identity has remained unknown since the project launched in August 2020. This approach is apparently common among major crypto players as the Bitcoin (BTC) founder Satoshi Nakamoto’s identity is still in a quandary.

The founder of Shiba Inu had previously mentioned his walking away from the asset in a pre-deleted post saying that he is a nobody.

“I have said from the beginning, I am a nobody, I am not important. The efforts to unmask my ‘identity’ even if successful would be underwhelming. I am just some guy of no consequence tapping at a keyboard and I am replaceable. I am Ryoshi.”

However, Ryoshi’s Twitter account is still up but all previous activities have been wiped out, but the profile picture has been changed to an image of Buddhist Jetsun Milarepa, a Tibetan poet and the header to a half-moon. 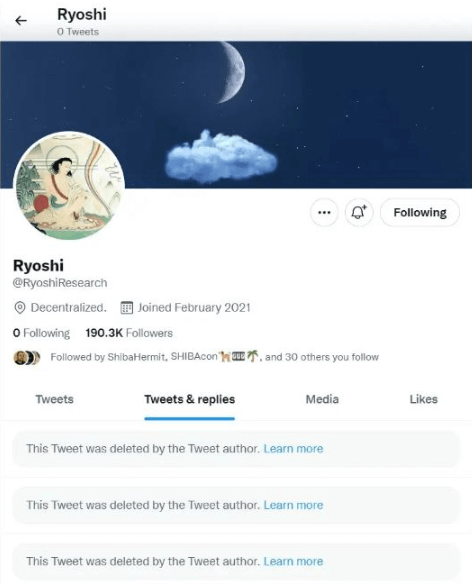 Many members and analysts believe that the recent act may be from a scammer or a fraud who created a new account under Ryoshi’s name.

Shytoshi Kusama, lead developer of Shiba Inu (SHIB), has said in a recent Tweet that  the Shiba Inu project will continue to move forward. This shows that the young developer of the SHIB team has put his focus on the ecosystem rather than adding fuel to the yellowish news fire.

It‘s been said that Ryoshi’s plan to return to the ecosystem is still up in the air.