Shibarium to be launched around the 3rd quarter of 2022

We all expected the Shibarium blockchain layer-2 solution to be launched in 2022, but the exact date was never certainly mentioned. Today, the Shiba Inu team shared a detailed post on their Medium blog about the third-party projects the Unification team is developing and Shibarium itself. The Shibarium blockchain layer-2 solution is a work-in-progress blockchain network designed by the Shiba Inu development team. It was initially designed to provide necessary support tools before the public Beta TestNet release. Now the company has officially announced the Shibarium Private Alpha TestNet being launched among the team of developers, adding that the tool was successfully running for a number of weeks.

Since the announcement, the Shiba Inu price has surged forward to 7%. Users can now buy and sell Shib for $0.00001052, at the press time.

Although there are still doubts about the exact release date, the Shibarium Public Beta TestNet is said to be launched around the 3rd quarter of the year 2022. This  Beta TestNet will allow users to finally test and evaluate the project, including the process of validation.

The long strategy of Shibarium is explained by the need to build it on a reliable foundation. For this purpose, Unificiation uses its own solutions, like xFUND and Oracle of Oracles (OoO).The shiba inu developers Shytoshi Kusama and Ryoshi have stated that the layer two solution will bring transaction fees down considerably and possibly to zero. Following this strategy, Shytoshi Kusama personally responded to a Shib user who had spent $800 in fees alone just to purchase Shib, saying that this is the reason why they are working on Shibarium. 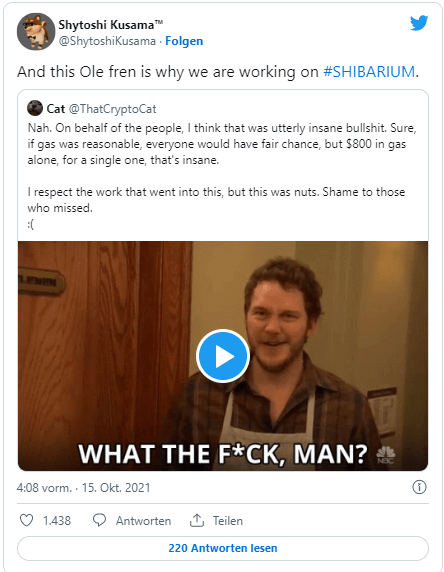 SHIB also has a burn strategy that aims to make the crypto asset less in amount by allowing people to burn SHIB in the burn address. Up to this point many SHIB holders have sent around more than 80 million of the Shiba Inu tokens to a dead wallet. However, SHIB is still the second largest meme cryptocurrency with 589,390,205,650,282 SHIB in circulation today.