Breaking: Significant day in the crypto industry as the Merge launches successfully

This is perhaps the most significant day for the crypto industry and crypto lovers who have been waiting a long time for the Merge, as it has finally happened successfully. On this long awaited day, Sept. 15 at 06:42:42 UTC at block 15537393, the Merge was successfully launched. The Merge which was initially aimed to move the network to a proof-of-stake (POS) blockchain will cut the energy consumption of the system down to 99.95%. With the Merge taking place successfully, the network will no longer rely on a proof-of-work (PoW) consensus mechanism.

Following the Merge, the price of Ethereum saw a slight pump to be traded at $1,588.06 at the time of writing, according to data by CoinMarketCap.

The Ethereum foundation has utterly confirmed that Ethereum will become 99.95% more energy sufficient and its future solutions like the sharding will have higher chances of taking place successfully.

Vitalik Buterin, Ethereum co-founder, announced and congratulated the event in a Tweet, moments after the launch of the Merge by calling it a big moment for the Ethereum ecosystem and expressing his gratitude for anyone who has helped the Merge happen successfully.

“Happy merge all. This is a big moment for the Ethereum ecosystem. Everyone who helped make the merge happen should feel very proud today.” 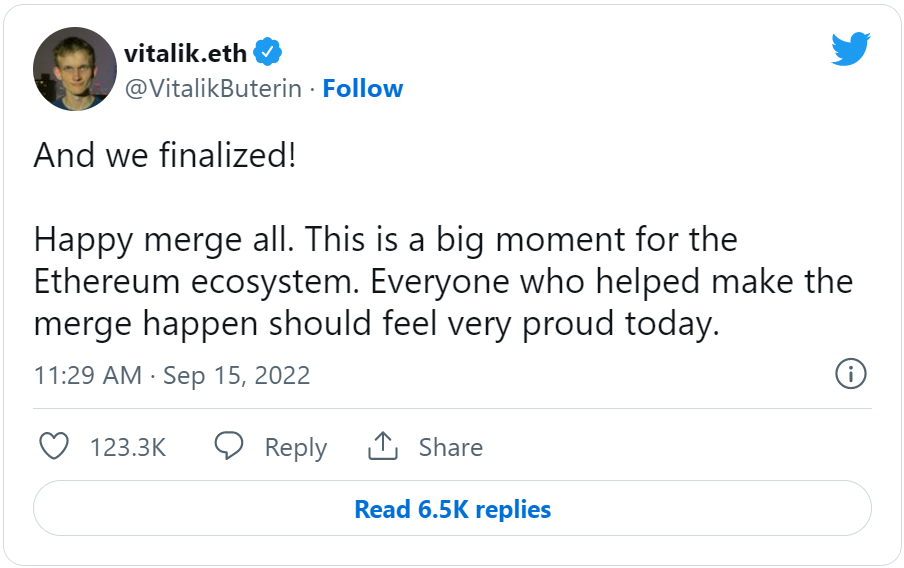 However, this is not the ending point in Ethereum’s roadmap as several other projects like the “Surge,” “Verge,” “Purge” and “Splurge” are still left to be done in the future of the asset.

Each of these projects will play a significant role in the future of the asset. These roles will include increasing scalability, statelessness and eliminating historical data and technical debt.