The company behind the development of Shiba’s layer 2 solution, Shibarium, has given an update on the most recent progress of the project but without mentioning any specific date.now the crypto industry is waiting for an answer to when the exact release date of Shibaruim will be finalized. In a blog post, Unification indicated that its advising work with Shibarium was ongoing in anticipation of the fourth successful alpha and public testnets, which it claimed will be issued at the end of the quarter or shortly thereafter.

The developer sector, it added, would be the subject of the highly anticipated inaugural public beta testnet, which would enable a ready network to serve the Shib community whenever it was ready. The public beta would also allow for much more open testing and problem repair to guarantee a reliable and secure mainnet launch.

“The public Beta TestNet will allow parties to fully interact with the network, including the validation process,” as said by the company in late june. 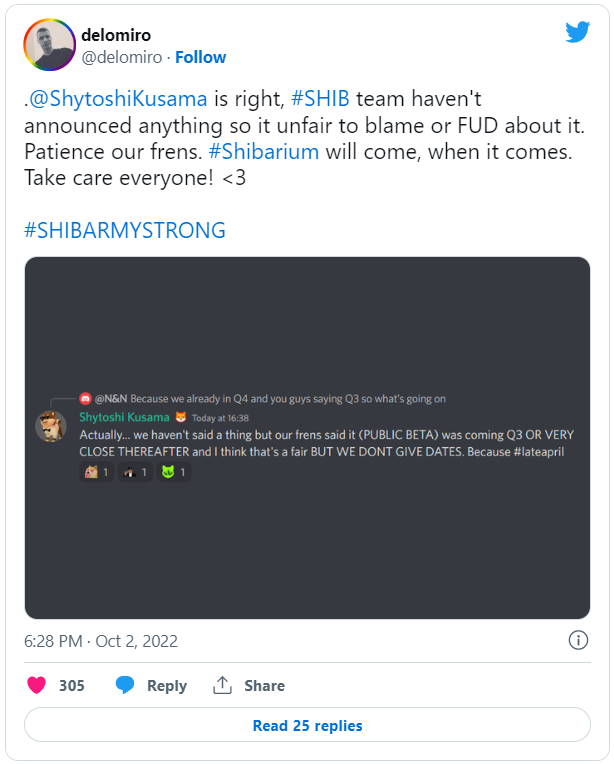 Unification announced in June that public beta testing of Shibarium might begin in Q3, 2022. As Q4 has already arrived, social media is suddenly inundated with calls for explanations and further information on the Shibarium launch.

The team has not yet issued an official release date for Shibarium, according to Shiba Inu's chief developer, Shytoshi Kusama. He also mentioned Unification's most recent update, which predicted that the Shibarium public beta will open in Q3 or shortly after.

According to the SHIB main developer, a portion of all proceeds will be utilized to assist multiple community-focused projects through a private investment vehicle. The specific proportion of Shiba Eternity revenues assigned to various initiatives may change from each month, but it will never be below 45% of total monthly profits.