According to a statement by Brian E. Nelson, American attorney and government official of the Treasury:

“Today, the Treasury is sanctioning Tornado Cash, a virtual currency mixer that launders the proceeds of cybercrimes, including those committed against victims in the United States.”

A crypto mixing platform  is a service that mixes potentially identifiable or "tainted" cryptocurrency funds with others, so as to obscure the trail back to the fund's original source.

All U.S. citizens and entities are barred from interacting with Tornado Cash or any of the Ethereum wallet addresses tied to the service and 44 USD Coin (USDC) and Ether (ETH) addresses connected to the mixer have been put on the list of Specially Designated Nationals.

Nelson also added that the crypto mixer “failed to impose effective controls designed to stop it from laundering funds for malicious cyber actors on a regular basis and without basic measures to address its risks.”

Antony Blinken, secretary of the nation, has also reacted to the action by claiming that they will aggressively pursue actions against currency mixers laundering virtual currency for criminals and supported the ban of Tornado Cash, which has been used to launder money for a U.S.-sanctioned DPRK state-sponsored cyber hacking group. 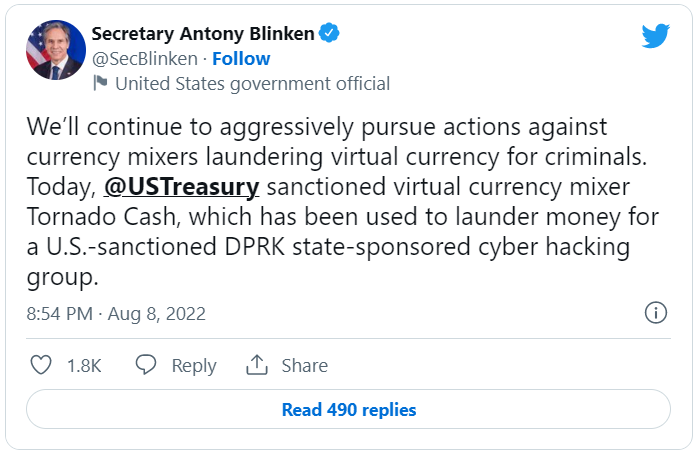 According to the Treasury department, Tornado Cash has been a key tool for a North Korean hacking group, called the Lazarus Group, tied to the $625 million March hack of Axie Infinity’s Ronin Network. The department has called currency mixers that assist criminals a threat to U.S. national security.