In a lengthy post on Monday, Vitalik Buterin, co-founder of Ethereum, decentralized autonomous organizations (DAOs) by claiming that they are useful. He has provided 3 sophisticated reasons for his statement by saying that DAOs are far more advantageous compared to traditional corporations and will not simply be knocked out by the second. According to the co-founder of Ethereum, DAO has constantly been criticized and accused of being insufficient compared to traditional structures and corporations. Vitalik has expressed his support by saying that DAO can occasionally be even more efficient than all those corporate structures.

According to Wikipedia, a DAO (decentralized autonomous organization) is an organization constructed by rules encoded as a computer program that is often transparent, controlled by the organization's members and not influenced by a central government.

In a Tweet on Tuesday Buterin has mentioned that “DAOs are not corporations: where decentralization in autonomous organizations matters.” 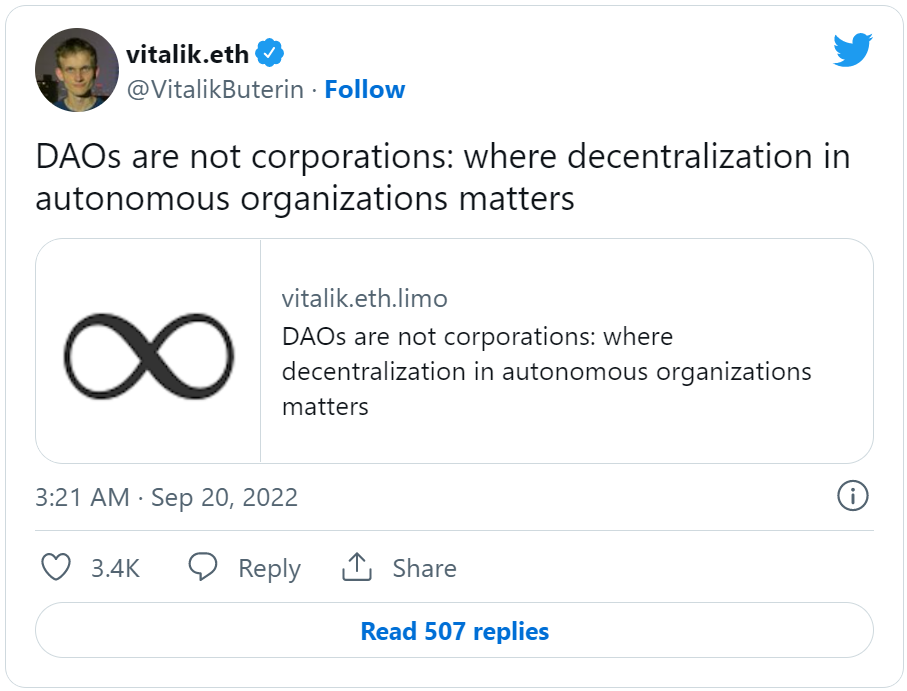 However, he does believe that this argument is wrong and that DAOs can outperform centralized corporate structures in certain situations.

But according to the developer, "concave environments"—situations where compromises between two extreme judgments result in the greatest results—are where decentralized decision-making may function at its finest. For instance, moderate tax rates are often preferable than either 0% or 100% tax rates for maximizing revenue collection and maintaining a healthy economy.

“When decisions are concave, relying on the wisdom of the crowds can give better answers,” said Vitalik. “In these cases, DAO-like structures with large amounts of diverse input going into decision-making can make a lot of sense.”

He concluded his statement by saying that some everyday normal organizations even in the crypto world can not work without “some non-corporate decentralized forms.”

“But this should not distract from the fact that the ecosystem would not survive without some non-corporate decentralized forms keeping the whole thing stable.”