What is Web 3 and how does it change the future of the internet?

“Web 3” or “Web 3.0” is a new and exciting term that has been around quite recently. Web 3 is basically the next generation of the internet with the aim to reduce the web’s dependency on large companies and personal corporations to put it in the hands of people and users of the web. But what is Web 3 precisely and how does it work? Follow the rest of this article to know all about Web 3 and its applications in real life. Obviously, the application of Web 3 in real life would be to the benefit of people and users of the web the most. But what changes would it bring and why is Web 3 so important after all? Will there be any limitations for using Web 3? How can we make use of Web 3 in our lives and to our own benefit? This blog will tell you about it all.

The answer to the question "what is Web3 (Web 3.0)" is essentially only that it's the next stage in the development of the internet, coming after Web 2.0. Even while there isn't a clear explanation of what this evolution would include, we can already see hints of what it will ultimately look like.

Web3 is expanding on and building upon preceding internet generations, much as those before it. Web3, which supports decentralization and is being produced, operated, and owned by its users, is not a Web that is monopolized by big tech firms. Web3 gives people the ability to make decisions rather than companies.

How will Web 3 Work?

The Hypertext Markup Language (HTML) standard governs the design and delivery of web pages with Web 1.0 and Web 2.0 technologies. With Web 3.0, HTML will still be a core layer, but how it relates to data sources and where those data sources are located may change from past web generations.

In the Web 2.0 generation, the majority of websites and almost all apps rely on some kind of centralized database to supply data and support functionality. With Web 3.0, apps and services employ a decentralized blockchain in place of a centralized database. The fundamental notion behind blockchain is that there is a type of distributed consensus rather than an arbitrary central authority.

Why is Web3 important?

Web3 offers its users the control of their digital assets. Let's take the scenario of playing a web2 game. An in-game item that you buy is linked to your account immediately. You will lose these things if the game's developers terminate your account. Or you lose the value of the in-game stuff you purchased if you quit playing the game.

Direct ownership is possible with Web3 thanks to non-fungible tokens. Nobody, not even the designers of the game, has the authority to revoke your ownership. Additionally, you may sell or trade your in-game possessions on open marketplaces to recuperate their worth if you decide to stop playing.

🟧See also: How to make money with NFT? 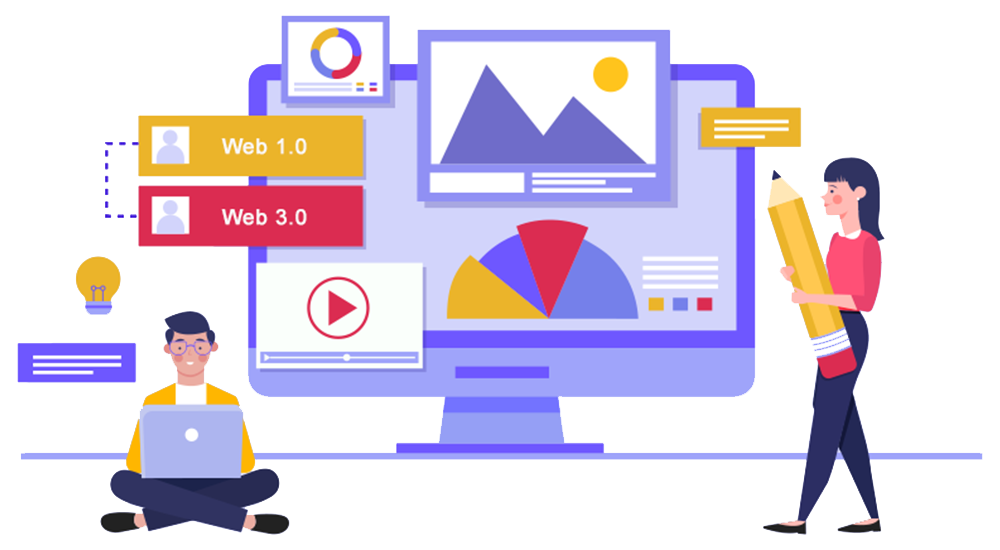 What are the limitations of Web3?

Web3 has many advantages, but there are still several restrictions that the ecosystem has to overcome if it is to grow.

Important Web3 features, such as Sign-in with Ethereum are currently used by anybody for free. However, many people still find the relative cost of transactions to be extortionate. Due to high transaction fees, Web3 is less likely to be used in less affluent or developed countries.

Plus, the understanding of Web3 will need a sophisticated amount of knowledge. Users need to be able to traverse confusing user interfaces, comprehend security issues, and complex technical documents in order to be able to utilize Web 3 easily in their everyday medium.

Web3 is not challenging, but it is different. Its success depends on educational programs that teach Web2 users the Web3 principles.

What can you do on Web3?

Web3 enables the spread of decentralized governance frameworks for formerly centralized goods. A work of art, someone's social media posts, or even a joke can all be tokenized.

The gaming industry is an excellent niche for web3. Players complain nonstop about the bugs that producers include in their preferred video game or how their favorite weapon's balance has been thrown off by the most recent patch. Players may make investments in the game and cast their votes on how it should be run using Web3.

Virtual worlds are being created by large Web 2 firms like Meta, who are also using Web 3. By enabling players to become the immutable owners of the objects they accumulate, non-fungible tokens (NFTs) will also significantly contribute to the transformation of the gaming industry.

Web3's environment is still in its early stages of development. The interest in cryptocurrencies, advancements in layer 2 scaling solutions, new forms of governance, and revolutions in digital identification have all seen significant increases in the past year alone. Web3 is just the beginning of our efforts to build a better Web, but as long as we keep enhancing the foundation that will sustain it, the Web's future is promising.