What is bitcoin halving? Everything you need to know

Bitcoin is a digital currency, true, but that doesn't make it endless in supply.you may have heard the name “Bitcoin halving” but do not know how it works or functions and what are its uses for the largest crypto asset in the world. Each and every year, new Bticoins are mined and added to the circulation and with only 21 million total Bitcoins and 19 millions already mined and 2 millions left, what happens if the amount of mined Bitcoin rises constantly? That’s right, the total supply of Bitcoin will end very soon and that is why Bitcoin halving happens every four years to prevent the cryptocurrency from becoming less valuable over time. If you are interested in the news about Bitcoin and what will happen to the future of the asset, stay with the rest of this article and we’ll tell you all about what Bitcoin halving is, how it works and what effects it have on the price of the world's largest and most popular crypto asset.

What is Bitcoin halving?

The Bitcoin halving happens when the amount of new bitcoin added to the network is cut in half. This event takes place every four years. The halving policy was written into Bitcoin’s mining algorithm to prevent inflation and maintain scarcity. This event is called halving because it splits in half the rate at which new bitcoins are released into circulation. Until all bitcoins are released, Bitcoin enforces a synthetic price inflation through this method.

A significant aspect of the halving event is that it represents yet another drop in the production rate of Bitcoin as its supply decreases as it nears its maximum. At the moment, Bitcoin has an inflation rate of less than 2%, which will decrease with further halvings.

See also: buy and sell Bitcoin with the best price

How does Bitcoin halving work?

In halving, all Bitcoin transactions are verified by a decentralized network of validators in a process called mining. The Bitcoin proof-of-work mechanism pays them 6.25 BTC if they add the first group of transactions to the blockchain using complex math.

Every 10 minutes, new blocks of transactions are added, and the Bitcoin code dictates that the reward for miners will subsequently reduce by half after every 210,000 blocks are created. That happens roughly every four years in periods and causes volatility in the price of the crypto asset. 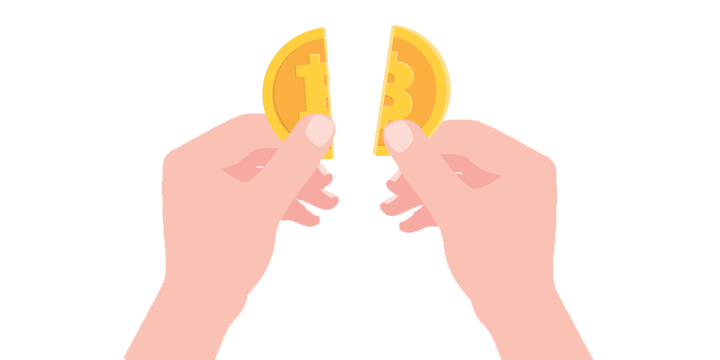 Does halving affect the Bitcoin price?

Normally, Bitcoin price always rises significantly after a halving event, but not right after.

Usually and with the three past halvings that have happened so far, the price of Bitcoin will rise significantly in six to twelve months post halving. Also, before a halving event, the price of Bitcoin tends to rise as investors anticipate a price rally post-halving, but you can't tell whether a rise in price will occur during the next halving and it depends on the circumstances surrounding these events which is not always the same.

How often is Bitcoin halved?

Halving happens every four years. Every 10 minutes, new blocks of transactions are added, and the Bitcoin code dictates that the reward for miners will subsequently reduce by half after every 210,000 blocks are created. That happens roughly every four years in periods and causes volatility in the price of the crypto asset.

When is the next Bitcoin halving?

halving happens based on a certain creation of blocks. There is no certain date mentioned for the next halving but experts point to May 2024 as an anticipated date which is almost four years after the last one. There are many other factors which can  influence the price of asset and  it looks like halving events are generally bullish for the cryptocurrency after initial volatility eases.