The world’s largest stablecoin Tether is apparently being shorted by hedge funds. Shorting or short-selling is an act of selling a digital asset in the hope that its value falls and then you can buy it back at a lower price and as a result earn a profit from the difference in the market price. Since the collapse of Terra in May, hedge funds have been borrowing millions in loans to short USDT. Hedge funds are financial pools where investors pour their money and in return, these companies promise active returns for their investors, either by shorting or by holding a long position.

Tether chief technology officer, Paolo Ardoino, have reacted to the act on Twitter by calling them attacks to create pressure with an intention to “harm Tether liquidity” so that they can eventually buy back tokens at a much lower Tether price.

Ardoino added  that some hedge funds have believed and helped spread fear, uncertainty and doubt about the stablecoin, aiming to  discredit Tether and ruin its reputation. 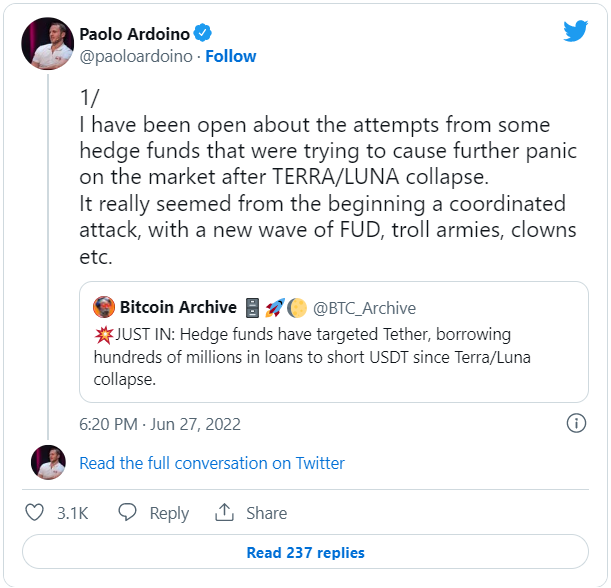 “Despite all the public 3rd party attestations, our collaboration with regulators, our increased transparency efforts, our commitment to phase out CP exposure and move into US Treasuries, our settlements, ... they kept thinking and suggesting that we, Tether, are the bad guys.” Said Ardoino in defense of Tether.

Ardoino has referred to some tools being used to short Tether. He stated that “competitors were spreading via coordinated troll networks” to ruin Tether’s reputation and cause damage to the system just to buy Tether back at a lower price.

Genesis Global Trading Inc, one of the largest crypto brokerage platforms, is where the traditional hedge funds have executed trades to short tether. Marshall, head of institutional sales at Genesis, has mentioned that the majority of short trades have come from traditional hedge funds in the United States and Europe, and they are increasing in number.

It is worth noting that if short-selling of Tether happens, it could de-peg from its value, causing another stablecoin crash. However, unlike Terra-Luna, Tether is backed by real assets.